Skip to content Skip to navigation
See our Campus Ready site for the most up to date information about instruction.Campus ReadyCOVID Help
UC Merced Center for Valley Fever Research
Connecting researchers and advocates within the San Joaquin Valley

Ike Davis Opens Up About His Valley Fever, or Whatever it Was, Last Year 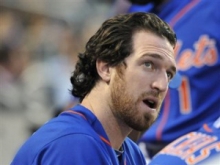 Last year Ike Davis was reported to have valley fever, a fungal infection that sapped his strength and led to him having a horrific start to the season. Of course he downplayed it all. His quote from last March:

“It’s been the same,” said Davis. “Seriously. I feel great. And I don’t have any symptoms of it. I’m not coughing. I’m not throwing up blood. I’m not doing anything. It’s not even hard to breathe. The doctor said I could play, and just don’t get really, really fatigued. So that’s what we’re doing. And if I get really tired, I kind of just step to the side and take a break … I don’t think I have an extreme case.”